Bones and Joints of the Hip

The hip is a single ball-and-socket joint made up of two bones. These bones are the thigh bone (femur) and pelvis. The femur is a long bone that consists of a head, neck, shaft, and other protrusions such as the greater and lesser trochanter, which serve as attachment sites for muscles. One end of the femur contributes to the knee joint while the other contributes to the hip joint.

The pelvis is a complex structure shaped somewhat like a funny shaped bowl. It is formed from the fusion of 3 bones; the ilium, ischium, and pubis. One side of the hip joint is the head of the femur, which makes up the “ball”. On the other side is the “socket”, or acetabulum (figure 1). The acetabulum, which gets its name from a Greek word meaning vinegar cup, encircles the round head of the femur and creates a smooth surface over which the femur can glide. It is the meeting point of the 3 pelvic bones.

What is the purpose of the hip joint? The hip joint allows for standing, walking, and running. It allows for effective stabilization of the lower body, and transfer of force from the upper body to the lower body. The hip also allows us to move our upper legs in various ways in order to run, jump, and perform a variety of other activities. 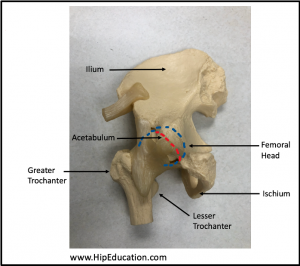 Ligaments of the Hip

Ligaments are strong soft-tissue structures that span a joint connecting bones to other bones (figure 2). They provide stability and help keep the hip in place as the head of the femur moves in different directions within the acetabulum. The hip joint is stabilized by 5 ligaments: 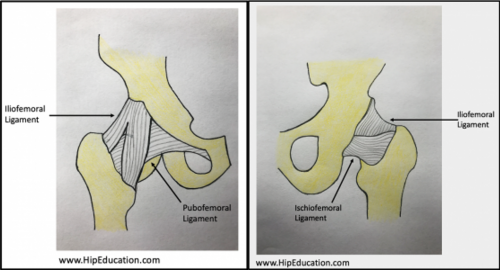 The iliofemoral, ischiofemoral, and pubofemoral ligaments are named for the bones they connect: the ilium, ischium, and pubis. Together, they make up something called a joint capsule which surrounds and protects the hip. The transverse acetabular ligament connects the two ends of the lower acetabulum, and the ligamentum teres attaches the acetabulum to the head of the femur.

Muscles and Tendons of the Hip

Contractions of various muscles around the hip joint allow the thigh to move, or the pelvis to be stabilized. Muscles of the hip can be broken down into 6 categories based on the type of movement they allow the hip to make, Muscles can belong to more than one of these categories as they often allow for movement in more than one direction. In addition to movement, muscles of the hip also provide stability to the joint.

Each of the muscles discussed above is attached to bone via a tendon. Tendons are similar to ligaments in that they are made up of thick connective tissue. They are often sites of inflammation, or tendonitis, which is a major cause of hip pain 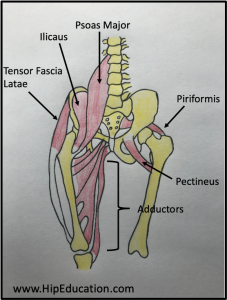 Nerves of the Hip

There are many nerves that supply the hip, allowing us to perceive sensations such as pain and temperature, as well as signaling our muscles to move. Nerves originate from the spinal cord, traveling between spinal cord segments. After emerging from the spinal cord, they often fuse together and subsequently branch in order to supply various areas of the body. There are five main nerves whose branches supply the hip joint:

Blood Supply of the Hip

The branches of the obturator artery that supply the hip include a posterior branch that delivers blood to the head of the femur and a branch that supplies muscles involved with adduction of the hip. Notably, there is a small branch of the obturator artery, the foveal artery, running through the ligamentum teres that can also supply blood to the head of the femur. 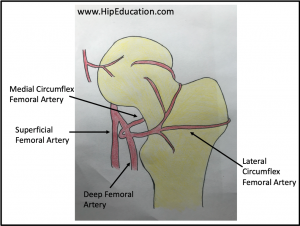