Hip arthritis is a disease that results from breakdown of the cartilage forming the hip joint – cartilage is the smooth white surface at the end of a bone that allows a joint to glide easily when it moves (Figure 1). Among the many causes of hip arthritis, osteoarthritis and rheumatoid arthritis are the most common. Hip arthritis can be characterized as mild, moderate, or severe depending on the extent of cartilage loss. Narrowing of the joint space and bone spur (osteophyte) formation are characteristics of hip arthritis that can be observed on x-ray. Hip arthritis causes pain, stiffness in the hip joint, and often a noticeable limp. Risk factors for the development of hip arthritis include obesity, older age, female sex, trauma to the hip, and a misshapen hip socket (developmental hip dysplasia).

Treatment of hip arthritis includes conservative measures such as pain medications, steroid injections, use of a walking aid, and physical therapy. Surgery may be considered as the disease progresses to a more severe stage, and consists of arthroscopic debridement, total hip replacement, or less commonly hip resurfacing and partial hip replacement. 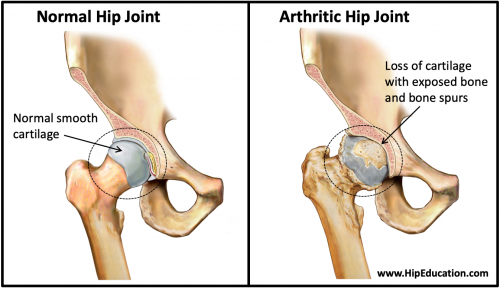 Hip arthritis develops from inflammation or degenerative wear of the hip joint resulting in the loss of some or all of the cartilage covering the joint surface. This leads to symptoms of stiffness, pain, and limited range of motion. There are many different types of arthritis. The two most common types are osteoarthritis and rheumatoid arthritis. Osteoarthritis occurs when the joint cartilage breaks down over time. This is most commonly due to a slightly misshaped leading to uneven wearing, akin to how a car tire put on in a slightly tilted manner will wear out one side of the tire more quickly. Less commonly, osteoarthritis of the hip joint can occur following a trauma such as a femoral neck fracture or traumatic hip dislocation. Rheumatoid arthritis is an autoimmune disease where the body’s own immune system attacks the lining of the hip joint (synovial lining) and eventually the cartilage itself. Other forms of arthritis include gout, psoriatic arthritis, pseudogout, reactive arthritis, and septic arthritis.

The joint space is the area between the two articulating surfaces of the joint that glide against each other to produce movement. In a normal hip, this area is filled with cartilage, which serves to reduce friction and absorb any impact that results from joint movement. Narrowing of this space as seen on an x-ray signifies a loss of cartilage as the cartilage, unlike the bone, is not seen on x-ray.

Hip arthritis can be broken down into three stages as follows:

Risk factors for developing hip arthritis include obesity, advanced age, developmental hip dysplasia, trauma to the joint such as a fracture, and prolonged participation in high impact sports. Females are more likely to develop hip arthritis than males.

An individual suffering from hip arthritis will experience pain that is worse with activities that put more force through the hip joint such as climbing stairs. They will also experience stiffness that is worse in the morning, and hip tightness. These symptoms most commonly occur in the groin area but can also radiate to the buttock, thigh or even the knee. Pain on the outside of the hip is less commonly from the hip joint itself and more commonly from a greater trochanteric bursitis or other irritation to the bone or soft-tissues on the outside of the hip area. Pain that radiates into the buttocks commonly originates from problems in the low back (lumbar disk disease and/or spinal stenosis). In addition, the hip may feel like it is “locking in place” on occasion when attempting to walk, and pain may extend down to the knee.

During the physical exam, range of motion will be decreased with both active movement (moving the hip yourself without assistance) and passive movement (when someone else moves your hip without your assistance). The severity of the loss in range of motion usually corresponds with the severity of the disease. There will also be pain with movement of the hip, tenderness around the hip and groin area, and warmth and swelling around the hip joint.

While moving the joint, the doctor may feel and hear cracking (crepitus) or grinding in the hip. Additionally, the affected leg can appear shorter than the unaffected side. Pain from the hip joint often leads to a limp favoring the healthier hip.

X-rays are the most important form of imaging when diagnosing hip arthritis. X-rays can reveal the presence and severity of joint space narrowing, osteophytes, subchondral cysts, and subchondral sclerosis. Cartilage, unlike bone, is not seen on x-ray and therefore a normal hip joint appears much darker than bone on x-ray. As a result, joint space narrowing will appear as a progressive loss of the dark space between the acetabulum and the femoral head. When diagnosing hip arthritis, it is useful to obtain x-rays of both hips, as hip arthritis often occurs on both sides. Repeat x-rays are helpful for monitoring the progression of the disease as treatment is pursued.

It is common to pursue non-operative treatments during the mild and moderate stages of the disease. These treatments have proven effective in managing symptoms for many years.

Physical Therapy: Therapy to strengthen the muscles surrounding the hip joint can be helpful in improving pain control and increasing function.

NSAIDs: Pain medications such as non-steroidal anti-inflammatories (NSAIDs) can either be ingested or applied topically to treat symptoms of pain and stiffness.

Assistive device: A cane or walker can also be used while walking in order to reduce the amount of pressure placed on the hip.

Weight Loss: Weight loss can further reduce the pressure being placed on the hip, which helps to relieve symptoms and delay disease progression.

Activity Modification: Avoiding activities that will predictably worsen symptoms can be an effective strategy to improve symptoms in patients with painful hip arthritis.

Operative treatment for hip arthritis is most often considered when conservative management fails to deliver adequate symptomatic relief. Surgery is a good option if an individual can no longer participate in activities as a result of arthritis, and if they are healthy enough to undergo surgery and the associated recovery.

Occasionally an arthroscopic debridement of the hip joint may be beneficial. Hip arthroscopy is performed by making small incisions around the hip through which a camera and other tools can be inserted. Using the tools, small pieces of bone or cartilage that have become loose can be removed from the hip joint. Removal of these pieces may help with pain relief and improve functioning of the joint. However, hip arthroscopy is NOT indicated for the treatment of hip arthritis. It is only recommended to address loose bodies, isolated cartilage damage, and certain impinging osteophyte. 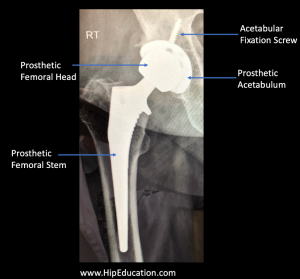 Revising a hip replacement after it has failed becomes an increasingly complex surgical challenge. As a result, surgeons are often hesitant to perform a hip replacement in relatively young people. Good candidates for total hip replacements are generally 65 years of age or older.

Hip resurfacing is a relatively uncommon procedure. The procedure involves covering the head of the femur with a prosthetic cap without removing the femoral head or neck. The acetabulum is also covered with a prosthetic, similar to a total hip replacement, in order to promote smooth gliding of the hip joint surfaces over one another. The theoretical advantage of hip resurfacing is that it can be more easily converted to a total hip replacement. It is therefore only reserved for Individuals who are younger and still moderately physically active.