A hemiarthroplasty of the hip joint is performed to treat fractures of the femoral neck when the pieces of broken bone are not well aligned (displaced). Femoral neck fractures most commonly occur in the elderly as a result of a fall onto the hip from ground level (low energy). A hemiarthroplasty is recommended over a total hip replacement in individuals who lead a more sedentary lifestyle. It is also recommended over hip pinning in cases where the risk of avascular necrosis and/or fracture nonunion is high.

A Partial hip replacement, or hemiarthroplasty, involves removing the femoral head and replacing it with an artificial version consisting of a metal femoral head and metal stem (figure 1). In contrast with a total hip replacement, the acetabular (socket) side of the hip joint is not replaced. The size of the patient’s femoral head is measured after it has been removed, and a prosthetic head of equivalent size is used to replace it. The prosthetic femoral neck length can also be adjusted to approximate the length of the existing femoral neck. A hemiarthroplasty can be performed using different combinations of surgical approaches, fixation techniques, and with different types of prosthetics. These variations are outlined below. 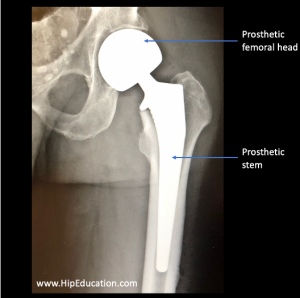 There are two types of devices that can be used in the hip hemiarthroplasty, each with their own set of advantages and disadvantages.

• Unipolar Hemiarthroplasty – This device is composed of a metal femoral head and stem that are fixed to each other as a single prosthesis. Movement of the hip joint takes place between the acetabulum and the metal femoral head only. One significant advantage of this device is that it is the least expensive of the two options. However, it is thought to cause an increase in acetabular wear over time and may result in a more limited range of motion than is possible with the bipolar device.

• Bipolar hemiarthroplasty – In this type of prosthesis, the metal femoral head swivels around the metal stem component. This means that hip movement occurs both between the acetabulum and metal femoral head, as well as between the metal femoral head and metal stem. The bipolar prosthesis is thought to reduce short-term wear on the acetabulum, but it is still unclear if this confers significant long-term benefit. A bipolar hemiarthroplasty also has the advantage of potentially being easier to convert to a total hip replacement at a later date if needed. This is because the swiveling head can be removed and the femoral stem can be used as part of the total hip replacement.

Fixation of the Hemiarthroplasty

The two types of fixation methods used in hip hemiarthroplasty that help adhere the prosthesis to the existing bone are cemented and uncemented. The cemented hemiarthroplasty use a bone cement that adheres the stem of the prothesis to the bone, while the uncemented hemiarthroplasty has a stem with a textured surface that promotes bone growth and adherence of the hardware to the bone overtime. The type of fixation to be used depends on the patient’s age and level of activity, as well as the expertise of the surgeon performing the procedure.

• Cemented Hemiarthroplasty –The advantages of using cement include lower rates of prosthetic loosening, immediate fixation of the prosthesis to the bone, and increased post-surgical mobility. In rare instances, the prosthesis may give off cement particles that travel through the body, which can cause adverse effects in the heart and lungs. Cemented fixation is preferred in elderly and less active individuals.

• Uncemented Hemiarthroplasty – Uncemented fixation does not provide immediate fixation of the prosthetic inside the femoral shaft because new bone growth takes time. Therefore, an uncemented hemiarthroplasty may require patients to limit putting weight on the hip in the initial weeks after surgery. The advantages of this type of fixation include eliminating the risk of cement breakdown and possible improved long-term adhesion of the prothesis to the bone. Uncemented fixation is preferred in younger and more active individuals.

A hemiarthroplasty of the hip can be performed using a few different techniques, each with their own risks and benefits. The technique that is used depends on the expertise of the surgeon, as well as what will best suit the individual undergoing surgery. In general, different techniques require disruption of different muscles, tendons, nerves, and vessels in the body. Although these structures heal with time, they may never fully return to their original condition. The 3 main approaches to a hip hemiarthroplasty are as follows:

• Posterior – The posterior approach is the most common approach used for hip hemiarthroplasty. This technique is advantageous because no muscles are cut or damaged during the procedure. Previously, the rate of hip dislocation following a hemiarthroplasty using the posterior approach was higher than with other approaches. However, the technique has been modified in recent years to drastically reduce this risk.

• Anterolateral – Performing a hemiarthroplasty from the anterolateral approach requires cutting the gluteus medius and gluteus maximus in order to get to the hip joint. These muscles are repaired after the prothesis is placed but may never fully regain their original strength and form.

An important part of recovery from a hemiarthroplasty is early mobilization using an assistive device such as a cane or walker. Individuals who undergo hip hemiarthroplasty are encouraged to begin placing weight on the hip almost immediately after surgery, often times sooner than with a total hip replacement. During the recovery period, increasing increments of body weight will be placed on the hip until walking without an assistive device is achieved. Any post-surgical pain can be managed with oral and topical pain medications. However, NSAIDs are generally not recommended for elderly individuals because of their potential to cause catastrophic gastrointestinal bleeding.

A hemiarthroplasty, like most other surgeries, increases the risk of developing a blood clot (deep vein thrombosis). To prevent this, blood thinners such as aspirin and the use of compression stockings to help return blood flow to the heart are recommended. Other key components of recovery include physical therapy and in-home exercises. Specific exercises designed to promote strength and stability of the hip, when performed regularly after a hip hemiarthroplasty, will help achieve the maximum possible activity level after surgery.

Potential complications of a hemiarthroplasty of the hip include: